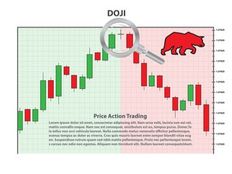 Candlestick patterns provide instant insights into market sentiment. For example, candlesticks with a small real body suggest indecision in the market, whereas candlesticks with a long real body suggest strong directional moves. Candlestick shadows also provide insight into intra-session volatility, which can be critical when looking at the underlying market psychology. Doji patterns are a great example of how these patterns can provide critical insights.

Let’s take a look at how to identify and trade the doji candlestick pattern, as well as an example of the doji patterns in action.

Click here to learn about the Day Trading Rules applicable to U.S. investors.

What Is the Doji Pattern?

The doji candlestick pattern is a cross-, plus- or T-like pattern that indicates indecision in the market. Traders can use the pattern on its own or in combination with other candlestick patterns to identify potential reversals in the prevailing trend.

The very thin real body suggests that there’s a lot of directional indecision in the market – that is, bulls and bears are fighting over control. Longer shadows usually indicate a larger fight with a lot of volatility, while shorter shadows suggest a quieter market with little volatility. Doji patterns with long shadows are usually the most reliable trading signals.

How to Trade Doji Patterns

Doji patterns are interpreted by varying positions and length of shadows, so traders have given different names to different shadow arrangements.

The most popular doji patterns include:

When trading in these patterns, it’s important to take the previous trend and volume into consideration. The most reliable trading signals are generated following a strong previous trend with higher than average volume during the doji session. It’s also a good idea to consider other forms of technical analysis as confirmation, such as trend line support or resistance levels.

Examples of Doji Patterns in Action

In the above chart, the dragonfly doji is immediately followed by a sharp increase in price as the bulls take over control of the price from the bears. The strong volume just before and on the doji pattern provides a strong signal that a directional move is about to occur. When zooming in, the breakout also occurs from a key trend line resistance level, which further confirms that a bullish move higher is likely to occur.

Doji candlestick patterns indicate indecision in the market. Depending on the length of the shadow and other factors, the indecision can translate to an imminent reversal in price or a mere suggestion that a reversal will eventually occur. The key is to look at the prior trend and volume for context, as well as using doji candlestick patterns in conjunction with other forms of technical analysis that can serve as confirmation.