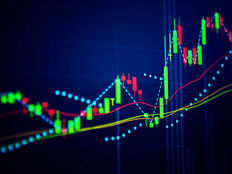 Most traders use technical analysis to find short-term opportunities in hourly or daily charts, but some indicators and patterns are designed to work on weekly or monthly timeframes.

In this article, we will look at how to identify and use rounded tops and bottoms, as well as explore some real-life examples of the pattern in action.

Don’t forget to check out other trading strategies here.

What Is the Rounded Top & Bottom?

There are five stages to rounded top and bottoms:

Rounded tops and bottoms perform best with U-shaped volume, where volume falls as the pattern reaches a tipping point and accelerates as the reversal picks up steam.

Traders use rounded tops and bottoms in the same way as many other longer-term reversal patterns, such as the head and shoulders pattern.

Take-profit points are calculated by measuring the distance between the top or bottom of the pattern and neckline, and then applying that distance to the neckline in the other direction. In some cases, traders may lock in profits on the way up or down using Fibonacci extensions from the neckline or other technical indicators.

Let’s take a look at an example of a rounded top pattern in the AUD/CAD currency pair:

In this example, the AUD/CAD produced a rounded top over the course of a week or two. The neckline was formed by connecting a prior high with trend line support that formed near the bottom of the rounded top pattern. Stop-loss points could have been placed just above the neckline, while the take-profit point was calculated by computing the distance between the neckline and rounded top (~789 pips) and subtracting that number from the neckline price.