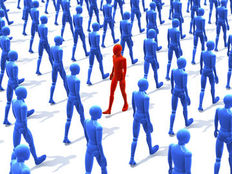 Most active traders have been told at some point that, “the trend is your friend” and “don’t try to catch a falling knife”.

Contrarian strategies may seem to contradict this advice, but in reality, they’re just different ways of profiting from the same trends. They work on the assumption that prices fluctuate randomly around a prevailing trend and that prices deviating far from the trend tend to reverse and revert back.

The most common contrarian strategy to capture these mean-reversion opportunities is known as ‘fading.’

What is the Fading Strategy?

Click here to learn more about the scalping strategy.

Overbought or oversold conditions are often identified using technical indicators, such as the Relative Strength Index (RSI). Momentum may show early signs of shifting as early buyers (or sellers) take profit off the table. And these trends may force current holders (or shorts) to rethink their positions.

These conditions are often exacerbated by a specific tipping point, such as an earnings announcement. A bullish earnings announcement may lead to a knee-jerk reaction on the part of other traders to buy the stock, but at some point, this reaction is over-extended and a mean-reversion takes place.

Here’s an example of a fading strategy in action:

In the above example, Snap shares experience a significant decline that leads to oversold RSI levels. Volume starts to decline after reaching a peak, suggesting that a trend change may be near. The following session’s price then opens higher, which points to a potential short-term bullish trend change.

How to Use the Strategy

Most fading strategies can be executed in three steps.

Some of the most popular technical indicators to use include:

These are oscillators where overbought or oversold conditions are indicated by a reading above or below a certain level. For example, the RSI is overbought above 70.0 and oversold below 30.0, which can help traders identify fading opportunities.

Traders may also use chart patterns, such as candlesticks, or simply rely on their own intuition when watching price action.

The second step is watching for early signs of capitulation or a change in the short-term trend.

There are several signs to watch for:

It’s important to identify these early signs to maximize the profitability of the trade and avoid missing a move.

Step 3: Enter into the Trade with Stro-Loss and Take-Profit

The third step is entering into the position and setting the appropriate stop-loss and take-profit points.

Limit orders are almost always used to place trades to avoid any slippage or other issues, particularly in less liquid assets.

Stop-loss points are often placed above or below key support or resistance levels. But take-profit points may be more dependent on a reversion to some kind of mean, such as a moving average or indicator reading, rather than a set price level.

Fading strategies can be very risky since they’re going against the prevailing trend.

It’s usually a good idea to use stop-loss and take-profit points to control the risk-reward of the trade. Although it’s important to leave enough room to avoid getting prematurely stopped out from an otherwise profitable trade.

Fading strategies are commonly used by short-term active traders to capitalize on short-term reversions to the mean along a prevailing trend.