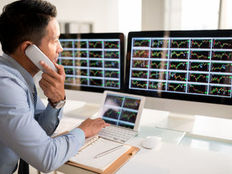 Those cognizant of where in the cycle the market stands can position their portfolios to take advantage of where the market is headed.

In this article, we’ll take a look at sector rotation and how it can be used to predict which asset classes are best positioned based on market cycles.

Be sure to also read A Trader’s Guide to Understanding Business Cycles.

What Is Sector Rotation?

Sector rotation is simply an investment strategy designed to profit from the movement of money from one industrial sector to another. While the concept originally stemmed from a theory developed by the National Bureau of Economic Research (“NBER”) relating to economic cycles dating back to the 1850s, the concept has evolved over time with the help of both academics and financial professionals.

According to NBER, there have been 11 business cycles between 1945 and 2009 with an average length of about 69 months. The average expansion has lasted 58.4 months, while the average contraction has lasted 11.1 months, which explains why the financial markets have trended higher over the long run. Of course, the level of profitability depends on where in the cycle investments were made.

Be sure to see our profiles of Wall Street’s Best Contrarian Investors.

The first step to implementing sector rotation is to understand so-called business cycles or market cycles. According to NBER, there are five stages of a cycle, which include three stages of expansion and two stages of recession. These five stages occur between four key periods that mark turning points investors should consider, including the trough, expansion, peak, and recession.

The easiest way to gain exposure to specific industries is using sector exchange traded funds (“ETFs”), which provide instant exposure to a diversified group of companies in a given industry. Using ETFs, investors don’t have to worry about constructing a diversified portfolio within a specific industry, while the strategy minimizes the transaction costs associated with moving in and out of stocks.

The sector rotation strategy has a number of caveats that traders should carefully consider before implementing it. For example, the strategy involves correctly interpreting large macroeconomic movements, which is difficult even for trained economists that exclusively study such things. Traders should keep these factors in mind and ultimately consider whether the strategy is right for them.

Some key tips to keep in mind include:

Be sure to also see the Illustrated History of Every S&P 500 Bear Market.

The sector rotation strategy involves looking at economic cycles to determine what industries are best positioned to profit. While these techniques are backed by solid research dating back to the 1850s, past performance is never a guarantee of future results, especially with the escalation in unconventional monetary policy. Investors should also be sure to consider the other risks discussed in the text above before making an allocation.