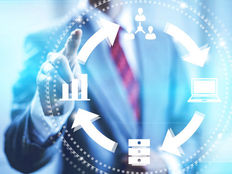 Predicting the stock market is notoriously difficult, but there are some well-defined and predictable patterns that arise from the chaos. Business cycles are a great example of these predictable patterns, arising from the inherent boom-bust nature of capitalist economies. Of course, there are many well-known variations of these cycles, such as the so-called January Effect or the 17.6 Year Stock Market Cycle.

In this article, we’ll take a look at business cycles and how they impact the financial markets, as well as how traders can track them to maximize their alpha.

What Is the Business Cycle?

Business cycles arise from changes in economic growth within an economy. For example, the U.S. stock market has gone through several business cycles over the past few decades highlighted by events like the tech bubble in 1999/2000 and the subprime mortgage crisis in 2007/2008. These types of events cause the peaks and troughs within the cycle, which is also called the economic or boom-bust cycle.

As seen in Figure 1, business cycles don’t necessarily mean that market downturns completely erase the progress made during market upturns. The U.S. has realized long-term growth in its gross domestic product, but the grey areas in Figure 1 show the temporary downturns along the way. As mentioned above, these downturns consist of peaks and troughs within the long-term bullish trend.

The changes in economic growth that cause business cycles are driven largely by liquidity in the financial system. For instance, excess liquidity in the U.S. financial system was a large contributing factor to the subprime mortgage crisis. Low interest rates made housing affordable to almost anyone, while investors looking for yield were willing to take on excessive risks when it came to lending.

Business cycles can be broken down into various stages, according to the U.S. National Bureau of Economic Research (Figure 2). For traders, each portion of a business cycle presents different opportunities to profit given that the dynamics tend to favor certain industries or asset classes. For example, market contractions tend to prefer defensive industries like consumer staples.

Expansions occur between the trough and peak of a business cycle and are characterized by an increase in production and prices, which are powered by low interest rates set by central banks. These periods tend to favor industries like technology, financials, and capital goods, which benefit from increased leverage relative to safer and more traditional industries.

Peaks occur at the top of a business cycle and are characterized by stock market crashes, multiple bankruptcies of major firms, and/or lower consumer sentiment, driven by the realization of excesses and the spread of fear throughout the financial market. These periods tend to draw capital into energy and precious metals sectors, which provide investors with a bit of a safe-haven [see also Top 21 Trading Rules for Beginners: A Visual Guide].

Contractions, or recessions, occur between a peak and trough of a business cycle and are characterized by falling production and prices, as well as decreasing or stagnant income growth. These periods tend to draw investors out of safe-havens and into more conservative industries like consumer non-cyclicals and utilities, which often have a dividend component and low beta coefficients.

Troughs, or recoveries, occur at the bottom of a business cycle and are characterized by a slow recovery in stock price, driven by the fall in prices and incomes that form the beginning of an expansion. These periods tend to favor turnaround industries like financials and consumer cyclicals, which are riskier than many other sectors, but not quite as bullish as technology or pharmaceutical sectors.

There are many different ways that traders can profit from business cycles, ranging from simply moving money into favorable industries to using specific strategies. While many of these strategies may seem straightforward, determining where an economy is within a business cycle can prove very difficult on its own, which means that sector rotation is half art and half science in the end.

Traders can improve their risk-adjusted returns by focusing on certain sectors during a given business cycle. Figure 3 shows how long-term performance compares between simply investing in the market, using sector rotation, and using market timing in addition to sector rotation between 1948 and 2006. While the market has eliminated some inefficiency, many of these trends still exist today.

The Elliott Waves Principle was developed by Ralph Nelson Elliott in order to analyze financial market cycles and forecast trends by identifying extremes in investor psychology. The patterns described by the principle can be accurately overlaid with business cycles in many cases, helping technical traders improve their market timing and ultimately enhance their risk-adjusted returns.

Kerry Balenthiran, a mathematician and chartered accountant, elaborated on the so-called 17.6 Year Stock Market Cycle in his book on the subject that sought to connect the panics of 1929, 1987, 2000, and 2007. In addition to these cycles, Mr. Balenthiran introduces a shorter 2.2 year cycle that could be more closely associated with the business cycles that are commonly found in economics.

Business cycles are a natural part of the boom-bust nature of capitalism, but they can also provide opportunities for traders. By knowing favored industries within each business cycle, traders can improve their long-term risk-adjusted returns, while other strategies like Elliott Waves can help improve market timing within those cycles in order to further enhance profits and limit losses.